Shakespeare’s language is hard to understand, even for native speakers. The best way to approach it is to deal with it in a creative way. The students could choose between three tasks: a) making their own insults (swearwords) using two adjectives and one noun, b) creating their own promoting item after choosing a Shakespeare quote or c) drawing a cartoon referring to one of Shakespeare’s plays.

Here are some examples of what students came up with:

“We decided to write and illustrate our own insult choosing three different, typical Elizabethan words. To make it more modern we used “spongy” Spongebob but as he is a nice character we had to make him appear “bad”. So we added “dizzy-eyed” and drew dark circles around his crazy eyes. The noun was still missing and it took a while to find a matching one that could be integrated into the picture. Then we had the idea to draw a mean-looking worm with pointed teeth and malt in its mouth. 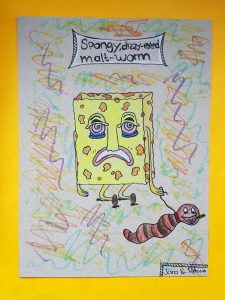 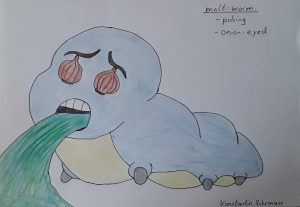 “William Shakespeare, often referred to as England’s greatest writer, famously known for his plays “Romeo + Juliet”, “Hamlet”, “Macbeth” and many more, just saw the insults some of these students had brought to paper and is in shock. He had never seen anything as scandalous as this before and cannot fathom what he has just witnessed.” 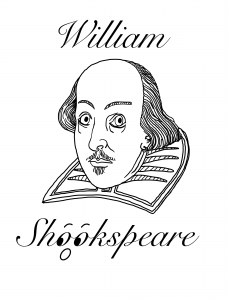 We decided to create a merchandise item with the very famous quote: “All the world´s a stage”. We take this wordplay literally and think that if all the world is a stage why not the UNDERGROUND stations. In our opinion it is a cool idea to bring Shakespeare to the public. No play is the same, it depends on how the people react. Maybe they call the police because they don’t get it. Maybe they start to interact with the actors. 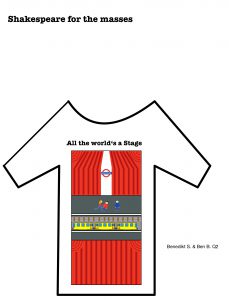 “We decided to create a cartoon based on “Shawn The Sheep”. The cartoon shows the death scene in “Romeo and Juliet” with our own dialogues. We added the fictional character “Farmer” at the end and a bit of sarcasm to make it funny. We decided to present Romeo and Juliet as sheep because it would have been too boring to draw them as human beings and we could refer to a popular TV show.” 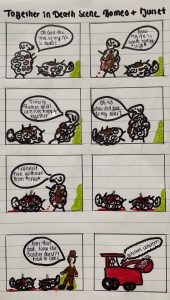